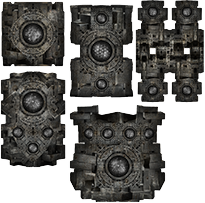 Artifacts are rare and powerful relic items. They are the targets of Salvage Missions. Each type of artifact has an effect on their environment and are sources of rare crafting materials.

Artifacts are kept inside the Artifact Holder in Alien Ruins and sometimes located on the Europan ice walls or sea floor. They require both hands to carry and cannot be put inside the player's inventory or any containers, which makes bringing them to the Sub more challenging. (Although this can be circumvented by being dragged by a 2nd player with an Underwater Scooter)

Artifacts can appear as any of 12 formations, made up of several overlapping grey rectangles with circular dents (See image). This kind of formation causes some parts of certain Artifact models to rotate on their own.

An artifact can be identified by hovering the cursor over the item to display its name, or by observing its effects. The Psychosis Alien Artifact has a darker shade of grey compared to the others.

Artifacts have a bright green oval blip on sonar.

The Faraday Alien Artifact sends out a 2 meter EMP blast every 15 seconds, damaging all Installations within its range, it is recommended that if it's required to transport the artifact for an objective it is kept in an area with no or mostly non-essential installations.

Fulgurium Bars, which can be used to craft

The Nasonov Alien Artifact attracts Creatures towards it when being held by the player swimming out in the ocean and when placed in the Submarine. This makes it one of the more dangerous Artifacts as it can cause swarms of Creatures to attack the Submarine simultaneously.

However, the sea Creatures of Europa will always prioritize food over the Artifact. Depending on which Creatures show up first, certain species will attempt to eat smaller preys before focusing on the Submarine. For example, Mantises will prey on Crawlers if they are nearby each other, Tiger Threshers on Mantises, etc.

Regardless, crew members must make haste with the Submarine to safety and avoid sea Creatures as the latter make their way to the Artifact.

Physicorium Bars, which are used to craft

Psychosis every second when being held.

Dementonite Bars, which are used to craft

The Sky Alien Artifact consumes all the oxygen inside the hull it's in. It is recommended to use a

Diving Mask or even a

Diving Suit when moving them around to avoid getting

Oxygen Low, and to store them in unfrequented parts of the Submarine.

Oxygenite Shards, which are used to craft

Liquid Oxygenite, to provide air to the room they're in, and also as a powerful explosive that can be thrown and explode on impact.

The Thermal Alien Artifact periodically (30 second intervals) generates Fire. Caution is to be taken so that they don't set the submarine ablaze.

One way to make Thermal Alien Artifact harmless is to let it remain in the airlock of the Submarine under flood, or any other hulls that can remain under flood without making it difficult to steer the Submarine.

During the Salvaging an Artifact Mission where the Thermal type is the target, the Artifact must be inside the ship's hull to count as recovered; wedging it in some exterior space does not count toward retrieval.

Incendium Bars, which can be used to craft