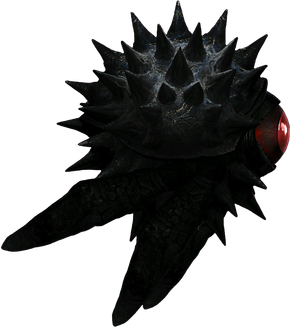 The Watcher is an enormous, orb-shaped creature reminiscent of a turtle or a crab. Named after its massive, ominous red eye, the Watcher lacks any true method of attack, but does inflict many negative effects in the form of

The Watcher consists of a jet-black main body of immense size that takes the shape of a sphere, and is surrounded by thick armor and protective spikes, giving it great resistance to almost all forms of damage, but this is balanced by its exposed paddles and large, vulnerable eye. Watchers are completely deaf, and rely entirely on their impressive sight to find objects of interest such as submarines or divers. Watchers are solitary and always found alone, and have no special interactions with each other.

Watchers are passive but inquisitive creatures: despite having no desire to attack the submarine or its crew, Watchers will still approach the ship to gaze at human activities. While the Watcher's passive behavior is a pleasant contrast to the other denizens of Europa, its effect upon the human mind with its deep gaze means you unfortunately have to deal with it in some manner, usually violence.

The Watcher constantly emits a loud, distorted "static" that is completely alien to all other sources of sound, making it easy to hear if one is outside the submarine.

To efficiently deal with a Watcher, a submarine crew should target its large, unarmored paddles or aim for its enormous eye. Although this will be challenging as the watcher constantly moves and twitches, and the nausea that comes with its gaze may make using weapons rather difficult. Alongside this, it will flee at a high speed while releasing caustic acid mist that burns divers and hull alike, so care must be taken to not pilot into it if the submarine is under motion.

The eye is highly susceptible to all Coilgun ammunition types, with a x5 damage multiplier for

Lacerations. A diver equipped with a firearm can also take advantage of the eye's same weakness to

The Watcher is completely immune to

Psychosis and its own

Watcher's Gaze. Spikes surrounding its shell are immune to

Bleeding and will absorb 90% of any

Upon being damaged, the Watcher will flee and deploy a green acid mist behind, which inflicts

Burns to divers and damage the submarine's hull. This damage is progressive, and each of the 9 acid "emitters" lasts 30 seconds.